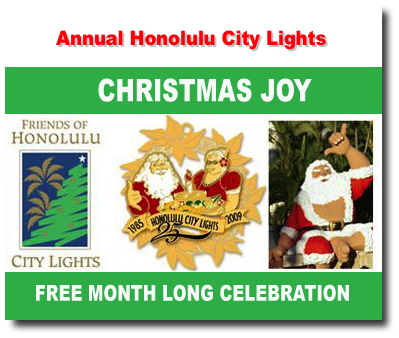 The eagerly anticipated event, presented each year by the City and County of Honolulu and the Friends of Honolulu City Lights, has become a beloved island tradition for thousands of residents and visitors since 1985.

The opening night festivities kick off a month-long celebration of dazzling lights and displays, family-friendly activities and merry fun on the Frank F. Fasi Civic Center Grounds. Mayor Kirk Caldwell will lead the official tree lighting ceremony at 6 p.m. Then at 6:30 p.m., he will ceremoniously illuminate the city's 50-foot holiday tree, triggering the lights and displays that adorn the city grounds.

One of the many highlights of the evening is the Public Workers' Electric Light Parade, which celebrates its 29th year as part of Honolulu City Lights. A dazzling procession of festooned city vehicles and school marching bands will travel from Chinatown through King Street, featuring the crowd-favorite dancing City Lights. Shannon Scott and Mele Apana will serve as parade hosts. Joining this year's parade is beloved Sanrio character Hello Kitty, who will ride as part of the Macy's contingent.

The public is encouraged to come early to take advantage of the free parking that is available in the city's municipal lot, with entry from the left lane of Beretania Street just past Alapa‘i Street.

Returning to opening night is the Honolulu City Lights block party, featuring more than 15 food booths located along the ‘Ewa-side of Punchbowl Street near the Hawai‘i State Library. Keiki rides, balloons and novelty items will also be available for purchase on the grounds throughout the evening. The Friends of Honolulu City Lights will be selling the event's 2019 Christmas ornaments, including a special 35th anniversary commemorative design. Sales of these collectible items go toward ensuring that Honolulu City Lights remains free to the public.

The opening night festivities, including the tree lighting ceremony, parade and concert, will be cablecast LIVE on Saturday, Dec. 7, at 6 p.m. on ‘Ōlelo Channel 53. Rebroadcasts will be shown on ‘Ōlelo Channel 49 on the following dates and times:

Hawaiian Electric Company and the Friends of Honolulu City Lights will produce a one-hour parade special to air on Saturday, Dec. 21, at 9 p.m. on KHON2. The rebroadcast will be shown on its sister station KHII on Tuesday, Dec. 24, at 6 p.m., and again on Wednesday, Dec. 25, at 9 a.m. on KHON2, and 7 p.m. on KHII.

The celebration continues throughout the month of December featuring several special events to delight island families. Honolulu City Lights will be open daily from 8 a.m. to 11 p.m., and will run through Dec. 29, including Christmas.

7 to 7:30 p.m.Celtic Pipes and Drums of Hawai‘i, near front steps of Honolulu Hale

4 p.m.Keiki rides and balloon, ornament and novelty booths open. More than 15 food booths will open at theHonolulu City Lights block party, which will run until 10 p.m.

The Honolulu Hale Courtyard will be opened, unveiling the beautifully-decorated Christmas treesdisplay, all created by city employees, and the public wreath contest exhibit featuring talented localartisans, presented in the Lane Gallery.

Santa will visit with children in the Mission Memorial Auditorium until 9 p.m., with picture takingsponsored by Hawaiian Telcom.

All floats and decorated city vehicles will be parked between Honolulu Hale and Alapa‘i/South streets, allowing keiki and families to enjoy the floats up close and meet the city workers until 8:30 p.m.