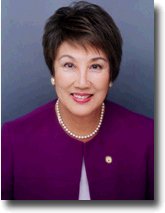 Barbara Marumoto has represented the Kaimuki, Kahala, Waialae area in the Hawaii House of Representatives since 1978. Before beginning her legislative service, Barbara was elected to the 1978 Hawaii Constitutional Convention. She was born in San Francisco and was interned during WWII. She is married to retired CPA Richard A. Coons,