The pageant included a separate interview segment held at The Willows on April 11th, which accounted for 50% of the overall score. Last night's competition featured fitness and evening gown segments, and a short-format interview with each contestant about their platform. 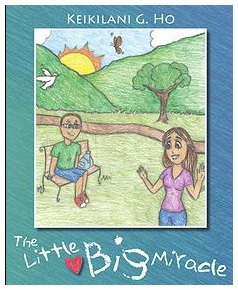 Ho's platform is supporting children with disabilities overcome and have hope through difficult times. Her own son, Jordan, was born 15 weeks premature and suffered various health challenges as a result, including partial blindness. After he was bullied at school, Ho decided she wanted to help not only Jordan, but all keiki who suffer bullying and other challenges due to their disability. She published the children's book The Little Big Miracle (see attached image) in 2011, about her journey with Jordan, for parents to share with their children. A strong Christian, Ho is also a leader at New Hope Windward's Kingdom Life High School Ministry.

Ho will now be preparing to compete in the Mrs. International 2013 competition on July 19 and 20, 2013, at the Northshore Center for the Performing Arts in Chicago, Illinois. Mrs. Hawaii 2012, Sheri Taflinger, a police officer with HPD, made it to the Top 16 out of 53 contestants at last year's pageant.

"I am so grateful to everyone who supported the pageant and made it such a huge success," said Dana Rickard, Mrs. Hawaii International Pageant Director. "All of the ladies are winners as they all are beautiful and dynamic role models who exemplify our mission. We congratulate Keikilani Ho for being a truly deserving Mrs. Hawaii International, and know she will represent Hawaii well in the international pageant with her beauty, grace, intelligence, and passion."

ABOUT THE MRS. HAWAII INTERNATIONAL PAGEANT

DL Productions, LLC has produced the Mrs. Hawaii International Pageant since 2010, with Dana Rickard as Director. It is the goal of the Mrs. Hawaii International Pageant to provide married women of Hawaii the opportunity to compete in a pageant system that maintains the highest of moral values. Find out more on our Facebook page at https://www.facebook.com/pages/MrsMissTeen-Hawaii-International-Pageants/132888416764330, or contact Rickard at (808) 384-1974 or <https://www.facebook.com/pages/MrsMissTeen-Hawaii-International-Pageants/132888416764330> MrsHawaiiInternational@yahoo.com for more information.

ABOUT THE MRS. INTERNATIONAL PAGEANT

Beginning 24 years ago, Mrs. International was developed to have higher standards than other pageant systems. The focus behind Mrs. International® is to showcase women 21 to 56 years old, married at least six months and a resident of the state or a citizen of the country she represents. Each contestant competes in Interview Competition, which is valued for 50% of her overall score, Evening Gown, valued for 25% and Fitness Wear for 25%. Each contestant has the opportunity to select a platform of her choice that she spends the year promoting. Husbands are a direct part of the show, escorting their wives in the Evening Gown competition, and the husband crowns his wife titleholder. Find out more at www.mrsinternational.com.