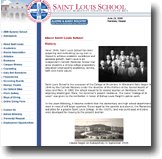 Honolulu, Hawaii. Ed Paola, Athletic Director at Saint Louis School announced that coach Matt Wright will not be returning for the 2014 season. Coach Wright has served in various coaching positions at the junior varsity and varsity levels. For the past two seasons, he has been the varsity head coach. "We are moving our program in a new direction and look forward to a fresh start" said Paola. Saint Louis School thanks Coach Wright for his eight years of service to our student athletes and the football program.

Established in 1846, Saint Louis School is the third oldest and only all male School in the state and for 167 years has been producing "Gentlemen of Character" -- servant leaders who can be found throughout the community.

www.saintlouishawaii.org www. Facebook.com/saintlouisschool"Where boys who want to change the world become the men who do"