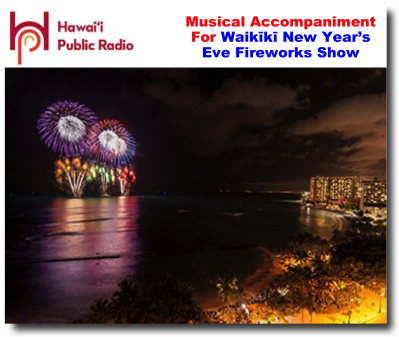 
The broadcast will consist of a countdown to the stroke of midnight, followed by a medley of local and pop music synced with the Waikīkī fireworks spectacle. It will serve as the finale for Bridging the Gap’s New Year’s Eve special (10 p.m. - midnight on HPR-1), hosted annually by Jon Alan.


Jon Alan is well known to late night listeners of HPR-1 as the voice of Blues from the Basement (Saturdays at 10 p.m. - Sundays at 1 a.m.) and B-Sides and Beyond (Sundays 10 p.m. - midnight). He traditionally brings in the new year for the station as guest host on Bridging the Gap each New Year’s Eve.


The fireworks show is funded by Waikiki Improvement Association, who have hired New York company Fireworks by Grucci as a gift to visitors and the local community. The company has produced the Waikīkī fireworks show annually since 2006 (there was no 2020 show due to the pandemic). Grucci’s unique designs will include color changing chrysanthemums, double crackling peonies, glittering strobes, and Brocade Kamuro shells that create a golden weeping willow-like effect descending towards the water. The largest aerial shell measuring 8’ in diameter, will be one of the largest displayed in the area on New Year’s Eve.


Attendees can tune in via traditional radio on 88.1 KHPR FM and 88.5 K203EL FM, by streaming on the HPR website or mobile app, or by using the smart speaker command “play Hawaiʻi Public Radio.”

HPR’s mission is to serve the entire population of the state of Hawai‘i with two excellent program streams.