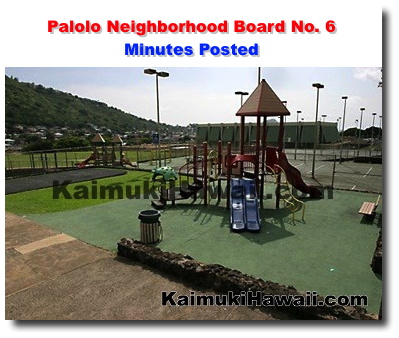 CALL TO ORDER: Chair Frost called the meeting to order at 7:01 p.m. Quorum WAS ESTABLISHED with eight (8) members present. Note - This 13-member board requires seven (7) members to establish a quorum and to take official Board action.

Board of Water Supply (BWS): Dominic Dias encouraged water conservation, provided tips and reported the temporary patch on 10th Avenue is on schedule for repair.

1. Repair: Shiraki noted reporting the issues with the temporary patch on 10th Avenue and Dias shared the process when addressing a water main break.

2. Sierra Tank: Hack inquired about the tank on Sierra Drive.

3. Water: Mau inquired and Dias reported water usage fluctuated in different area but overall it has gone down.

REPORTS OF MEMBERS ATTENDANCE AT OTHER PUBLIC MEETINGS: None

Questions, comments, and concerns followed: Absences: Kawamoto and Hack suggested reminding Board members of their absences before a letter is sent. Senator Ihara suggested reaching out to various communities to serve on the Board. Shiraki and Mau shared the process to continue serving on the Board.

2. Kuahea Update: Shiraki inquired and Councilmember Say replied Kuahea and Waiomao Streets up to 10th Avenue backside will be repaired and have a road.

1. Relocation: Hack inquired and La Chica reported the homeless family shelter is a State contract and the City is working with them for their relocation.

3. Navigation: Resident Kalei Salcedo reported there is a need for homeless resources after 4:00 p.m. instead of HPD during afterhours and added the State legislatures need to be held accountable for homeless.

4. Voting: Shiraki inquired about the voting method this election.

• Voting: Shiraki inquired and Awakuni-Colon noted the election will be mail-in with option to vote in-person.

1. Restructuring Mauna Kea Bill: Kawamoto inquired and Representative Sayama shared the committee restructuring the Mauna Kea bill is made up of various members in the Native Hawaiian community.

Senator Les Ihara Jr.: Senator Ihara reported this year's elections will be an all-mail-in ballots with multiple drop off locations around the island. Senator Ihara displayed interest in helping the Board get more members. Senator Ihara provided legislative updates such as bail reform and changes to the minutes just to name a few.

1. Ceded Lands: Kawamoto and Senator Ihara discussed the situation of the ceded lands inventory and increasing the annual revenues the Office of Hawaiian Affairs (OHA) receives from ceded lands.

2. Voting: Kawamoto inquired and Hack replied registration is permitted to those who live in the area. Senator Ihara reported general mailboxes are available to request a ballot. Shiraki inquired and Senator Ihara reported there will be no voting booths however there will be areas to fillout and drop off ballots, adding registered voters will have a ballot delivered.

Mau MOVED and Hack SECONDED the Motion to Approve the minutes from the Wednesday, April 13, 2022 regular meeting as friendly amended. Hearing no objections, the Motion was APPROVED by UNANIMOUS CONSENT.

• Strikeout instances of "Melvina" and replace with "Melvia".

Treasurer's Report: Hack shared the Board's allocation and a remaining balance of $194.50.

ADJOURNMENT - The meeting adjourned at 9:22 p.m.