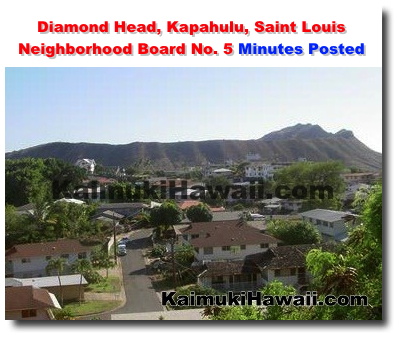 CALL TO ORDER - Chair Salenger called the meeting to order at 6:00 p.m. Quorum was established with three (3) members present via Webex Application and six (6) members at the Ala Wai Club House, total of nine (9) members. Note - This 15-member Board requires eight (8) members to establish a quorum and to take official Board action. Board members must be in-person or have video access.

Honolulu Fire Department (HFD): [6:00 p.m., 6:03 p.m.] No representative, but a September 2022 report was provided by HFD on the OneDrive. There were five (5) activated alarms, 65 medical emergencies, three (3) motor vehicle crashes, and one (1) mountain rescue. Residents were advised to be careful with holiday lighting displays.

• Mayor's Newsletter: The Mayor's newsletter may be found at https://www.oneoahu.org/newsletter.

• Leahi Avenue: Conditions are improving, trucks have been removed, and a meeting was held with the Leahi Street Committee regarding parking spaces.

• Makalei Beach Park: This is a State park and State land, not under City jurisdiction. The City is working with the State to address resident's concerns.

Questions, comments, and concerns: Residents voiced concerns that some trees on Leahi Avenue were planted below utility lines and could grow into the lines causing problems. Concerns were voiced regarding Bill 27 and the potential for alcohol to be served on sidewalks.

Councilmember Calvin Say: [6:37 p.m.] Councilmember Say provided his newsletter, which may be found online at https://www.honolulucitycouncil.org/district-5-say.

Representative Bertrand Kobayashi: [6:48 p.m.] Representative Kobayashi provided his newsletter and reported that there will be no special session regarding the Grand Jury System.

Safety Concerns on Harding Avenue between 2nd and 3rd: [7:04 p.m.] Residents Gary Mizushima and Lana Gimber provided a presentation and reported the following:

• The Problem: Safety concerns were voiced regarding the section of Harding Avenue between 1st Avenue and 5th Avenue. Concerns include speeding, head-on collisions, and collisions with properties.

• Solutions: Residents and Board members advocated for speed calming measures such as four-way-stops, raised crosswalks, speed humps, or other alternatives.

L. Wong moved and B. Wong seconded the Motion that the Board write a resolution addressing the traffic on Harding Avenue for the Neighborhood. [7:18 p.m.]

• Tax Information: Yamachika answered various questions regarding general excise tax (GET) revenue, the difference between GET and sales tax, and which levels of government can impose which taxes.

Neighborhood Resilience Hub Liaison: [7:46 p.m.] Dean Carol Hoshiko, KCC, reported upcoming in-person workshops for the neighborhood resilience hubs, designed to provide resiliency for kupuna and keiki. Chair Salenger stated the Board is looking for someone to act as a liaison for this project.

• Ala Wai Boulevard Changes: The Street will be resurfaced, at this time changes will be implemented. Changes are still being finalized. A list of proposed changes was provided and will be fully outlined at upcoming community meetings including a virtual meeting on Wednesday, October 26, 2022.

Questions, comments, and concerns followed: Residents and Board members voiced opposition to the proposed changes. Chair Salenger asked and Alexander clarified that the Ala Pono Bridge is a separate project, however the two (2) projects are coordinating with each other.

• Board Minutes: Minutes of Board meetings are the Board's responsibility to draft and edit. The NCO prepares a draft copy of minutes as a courtesy and is not required to do so.

• Sunshine Law: The State Sunshine Law clarifies that minutes do not need to be word-for-word. Sunshine Law applies to Boards but does not apply to the NCO.

• Order & Decorum: A Board's Chairperson or the majority of a Board can expel disruptive participants from Board meetings.

Questions, comments, and concerns followed: West voiced agreement. Matson and L. Wong voiced opposition to the presentation and dissatisfaction with Board minutes. Welch asked if extra funding could incentivize the NCO to draft longer minutes and Executive Secretary Yonenaka responded no.

Welch Moved and Matson Seconded the Motion to not approve any sets of minutes until the minutes have a chance to be corrected. [8:44 p.m.]

Discussion followed: Welch voiced concerns regarding the drafted minutes and proposed having the Board Secretary amend the minutes. West asked who would correct the minutes, Whitsell recommended having more people than just the Board Secretary correct the minutes. Beutel voiced opposition to the Motion, stating that too many changes leads to dispute. Beutel suggested using the video recordings for complete records of meetings. Matson voiced disapproval of current draft minutes and noted that minutes are required for public meetings under the State Sunshine Law.

The meeting was adjourned at 8:56 p.m. due to facility closure, all other Agenda Items were deferred.